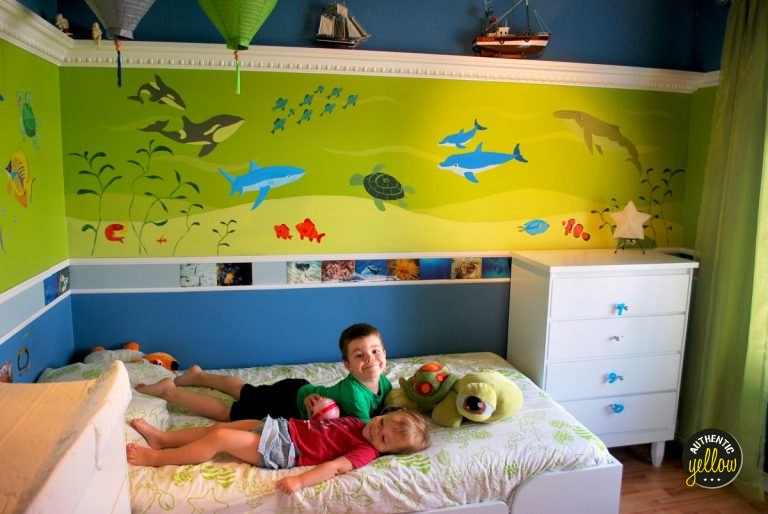 For the first couple of years after Orléane, my second one, was born, the kids shared a bedroom. Xavier, my oldest, was 1 and a half, and a sound sleeper, so it worked well. They started with crib + transition bed, then transition bed + twin bed. However, when the time came for Orléane to get a twin bed, I knew that a boy and a girl sharing a small, 11.5 feet by almost-10-feet, bedroom would not work in the long run. It was time for one of them to move out.

Our house has a main floor and a finished basement, and it has two bedrooms on the main floor. Since we only use our bedroom for sleeping and storing clothes — while the kids use theirs for sleep, play, and storing their toys and things — we decided to build ourselves a small room in the basement, and give up the main floor for the kids. In any case, the TV and computers are downstairs, so once we retire to the basement for the evening, the kids have a quiet space for sleeping upstairs.

My daughter got the master bedroom — call me old-fashioned, but I figured that, in the long run, a teenage girl was likely to own more clothes and things than her brother. I will share more about her girly bedroom in another post.

MURAL
Once she moved out, we repainted part of Xavier’s bedroom, and I painted a mural on one wall. The room already had a discreet sea & stars theme, so I expanded on that by designing a sealife tableau. Sure, the portion of wall meant to sport the sea mural was bright green (the ceiling and lower-half portion of the walls were already blue, so we didn’t want to use blue again for the middle portion), but I decided that a green sea was going to work. And it did!

Even if Xavier was only four, I wanted the mural to last a while and not feel too cartoon-ish, so I got inspiration from images of realistic, while simple, animals that Xavier knew and loved. I drew them on a sheet with the same proportions as the wall, and coloured them. Once it was to my liking, I used a ruler to draw a grid over the image, then drew the same grid (in very, very pale pencil marks) on the wall, in a larger format.

After that, it was a simple matter of drawing the animals again on the wall with pencil, while keeping proportions in check. Having just said that, it’s important to note that, at this stage, it’s okay if the animals are « pretty much » the same, and not exactly perfectly identical as the original drawing. When we try to imitate something too much, I find we loose some of the natural flow in our hand, and shapes and lines feel constricted. It’s better to let loose and draw lines in one sweep, like we were drawing the image for the first time again, even if it’s not entirely identical.

The last step was painting the background (sandbanks), then the animals with acrylic paint. When painting, I went over the lines on purpose, to hide them. As for the gridlines, I erased a few, but for the most part they are still on the wall — the images draw the eye and we hardly notice the very pale lines.

(That odd-shaped mini-fish was painted by Xavier himself, who was glad to have his own little fish there.) I repeated a few of the colours throughout, to help tie everything together. For larger animals, I mixed the paint with green so they would appear faded, giving the impression they are farther.

SPRINKLED CEILING
When we originally painted the blue, we sprinkled the ceiling with silver sprinkles. The sprinkles were in a large shaker. Frank would roll the paint over the ceiling and, while it was still wet, I would sprinkle upward right away. A good quantity fell on the floor, but many of them stuck on. The effect is quite nice: the minuscule silver dots are all on different angles, so they each glint at various points, depending on the light.

SEALIFE PHOTOS AND MINI-BOATS
Two moldings at chair-rail level left enough space between them to frame a series of colourful sealife photos. A ledge at the top of the wall is a nice place to lift small wooden boats over the « sea » on the wall. Since Xavier turned 10 this summer, we recently updated a few of the colours from his room, but we weren’t ready to part with the mural yet (he still loves it). Once the few final touches are done, I’ll share the new room with you guys! 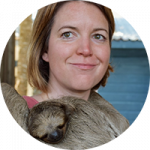